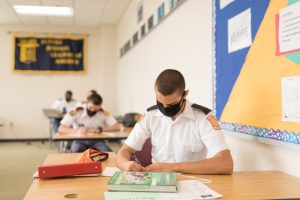 MEXICO, Missouri — One of the premier military boarding schools for boys in the United States, Missouri Military Academy has received a $50,000 gift from the family of the late Robert H. Nicolaus II, who graduated from MMA in 1972. The unrestricted gift was a bequest in her son’s memory from the former cadet’s 100-year-old mother, Helen Nicolaus, who died July 20 in Fort Myers, Florida.

MMA President Brigadier General Richard V. Geraci, USA (Ret), says the school will apply the gift to support the Academy’s strategic plan to continue to provide a transformative middle and high school educational experience that teaches young men how to take command of their lives through emphasis on structure, self-discipline and accountability.

“We are grateful to the Nicolaus family for their generous gift,” Geraci says. “The MMA experience creates deep brotherhood ties that last a lifetime, even impacting other family members. Decades after young Cadet Nicolaus’s time at MMA, his family felt the connection. Estate gifts like this show the deep impact the Academy continues to have on young men’s lives and their families after they graduate.”

Called Nickey by friends and family, Cadet Nicolaus attended MMA from 1967 through 1972 and was active on the Fusileers drill team, basketball, softball and tennis. A native of Wilton, Iowa, Nickey enjoyed spending time at the Goose Paradise hunting preserve in Missouri where his parents — Robert Sr. and Helen — were part owners. “Nickey was an outdoorsman, like his father, and loved to hunt, fish and boat,” recalls his sister, Sheryl Nicolaus. “He made many good friends at the Academy, loved the Fusileers (according to Mother), and wanted to play chess with me through the mail! I regret that I was not a very accommodating big sister, probably because I wasn’t that big of a chess fan.”

After graduating from MMA, Nickey attended Drake University in Des Moines and worked for Avco Financial Services. “At the time of his death,” Sheryl says, “we learned — to our surprise — that he was also working undercover with the Des Moines Police.” Nickey died in a one-car accident near Camp Dodge, Iowa, on June 11, 1977.

Providing private, college preparatory education for boys and young men in grades 7 through postgraduate, Missouri Military Academy is the only military boarding school in Missouri and one of few such select schools in the United States. MMA’s 360˚ Education® program focuses onthe needs of boys during their formative years, tapping into what motivates them — structure, positive reinforcement, consistent physical and mental challenges, loyalty and team membership. MMA inspires boys from around the world to reach their full potential. For more information, visit MissouriMilitaryAcademy.org.

Confidentiality Notice: This e-mail, including all attachments, is for the sole use of the intended recipient(s) and may contain confidential and privileged information. Any unauthorized review, use, disclosure, or distribution is prohibited unless specifically provided under the Missouri Open Meetings/Records Law. If you are not the intended recipient, please contact the sender and destroy all copies of this message.