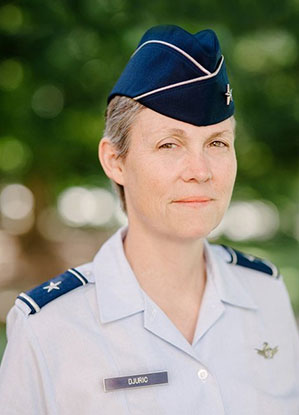 Brigadier General Terry Djuric (USAF, Retired) is the Commandant of the Cadet Corps for the Virginia Women's Institute for Leadership (VWIL) at Mary Baldwin University in Staunton, Virginia. General Djuric was commissioned through Officer Training School and served 30 years active duty before accepting her current position. She operated space systems at three space wings and Headquarters 14th Air Force. In 2004, she deployed to Southwest Asia as Director of Space Forces for operations Enduring Freedom and Iraqi Freedom. She has commanded at the squadron, group, wing and education center levels, and has served on staffs at the Air Force Personnel Center, U.S. Pacific Command, Headquarters U.S. Air Force and the Office of the Secretary of Defense.