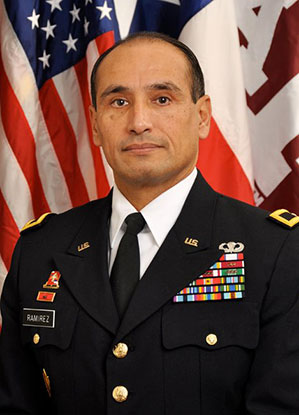 Brigadier General Joe Ramirez is a native of Houston, Texas and is a graduate of Texas A&M University, where he was a member of the Texas Aggie Band in the Corps of Cadets. He received his commission in the United States Army Field Artillery from Texas A&M in 1979 as a Distinguished Military Graduate.

During his 31 years of military service, General Ramirez commanded soldiers around the world and served in leadership positions in various joint and operational commands. He was the Deputy Chief of Staff for United States Central Command during Operations Iraqi Freedom and Enduring Freedom, and was the Deputy Division Commander for the 2nd Infantry Division in the Republic of Korea. His most recent assignment was Deputy Director for Strategy, Plans, and Policy for US European Command in Stuttgart, Germany.