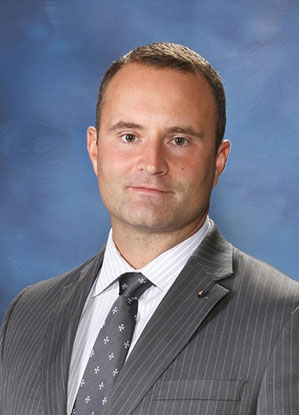 He earned his B.S. in Information Sciences from Carnegie Mellon University. Prior to joining Benedictine, Mr. Grapes served for five years as a Principal and Regional Director for a highly-awarded, innovative and for-profit 7,000 student school system in the California Bay Area.

Before becoming an educator, Mr. Grapes served his country as an infantry platoon commander in the United States Marine Corps, which he joined the day after 9/11. During his time as a Marine officer, Mr. Grapes deployed for three combat tours of duty in Iraq and earned numerous awards, including the Bronze Star and the Purple Heart.

Mr. Grapes' military accolades have been featured in the History Channel documentary, Shootout, and the motion picture film, The Last 600 Meters.

Mr. Grapes and his wife, Elizabeth, have four children and are active members of Saint Joseph's parish. Mr. Grapes also serves Catholic causes in the Middle East as a Knight in the Equestrian Order of the Knights of the Holy Sepulchre of Jerusalem.