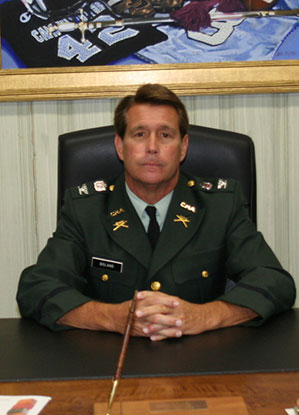 Col. Boland is a South Carolina native and a graduate of The University of South Carolina where he earned a Bachelor of Arts Degree in Philosophy as well as 2 Masters Degrees and an Educational Specialist Degree in 2009. Eric also completed The Executive Leadership and Management Program from the Mendoza Business College at The University of Notre Dame. He also holds a PHD in Christian Counseling.

Col. Boland has served as a teacher, coach, athletic director, principal and now headmaster at Camden Military Academy. He has been at Camden Military Academy 34 years and has served as Headmaster since 2003. He has received numerous awards and accolades that include: State Coach of the Year, The Sons of the American Revolution COL Lemuel Benton Award for Patriotic Endeavors and the Camden Junior Welfare League Community Service Award. Col. Boland is also proud to be a lead organizer and sponsor of The Kershaw County Special Olympics.