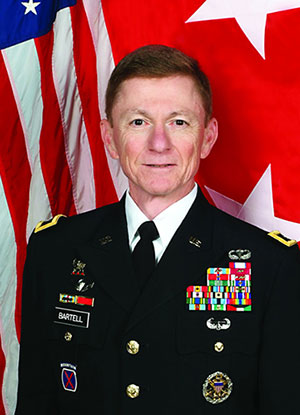 General Bartell was born in Brooklyn, NY - the son of a career Army Officer. He was commissioned as an Army Field Artillery officer in 1977 through ROTC at the University of Michigan and graduated with a Bachelor's Degree in Zoology. He has also earned Master's Degrees in Behavioral Science from Catholic University, and National Security and Strategic Studies from the U.S. Naval War College.

General Bartell's leadership has made a profound difference in units at locations such as Korea, Alaska, Germany, Saudi Arabia, Haiti, Afghanistan and Iraq. He is a veteran of Operations Desert Shield, Desert Storm, Uphold Democracy, Enduring Freedom, and New Dawn. His stateside assignments include service with the 101st Airborne Division (Air Assault,) the 10th Mountain Division (Light Infantry,) and the XVIII Airborne Corps.

His last assignment was the Deputy Director and Chief of Staff of the Army Capabilities Integration Center, Training and Doctrine Command at Fort Eustis, Va., General Bartell retired from the Army on September 1, 2013. His 36-year career has included combat assignments in Kuwait, Iraq, and Afghanistan; as well as a stint as Commanding General of the U.S. Army Cadet Command.

General Bartell is married to the former Karen Gravlin and their family includes son Aaron, his wife Talia, and grandson Daniel; son Kevin and his wife Megan; and son Benjamin.